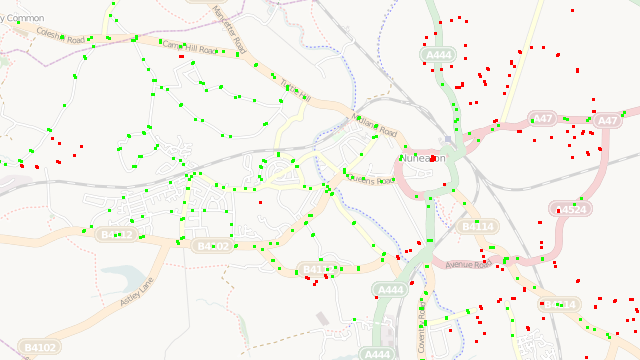 This map is a visual representation of some simple spatial analysis. Shows bus stops on OpenStreetMap, imported in bulk from the NaPTAN (National Public Transport Access Nodes) dataset, overlaid on the standard OpenStreetMap render showing roads. Bus stops which are further than 40 metres from the nearest road are coloured red, to highlight places where a road is likely to be missing and should be targeted by the community when aiming to “complete” the map. The nearness calculation is performed using a spatial SQL query on the underlying PostGIS-based database.

Current status: Offline. Following the OS OpenData release, and other improvements to OpenStreetMap data sources, the utility of this tool was largely superceded.